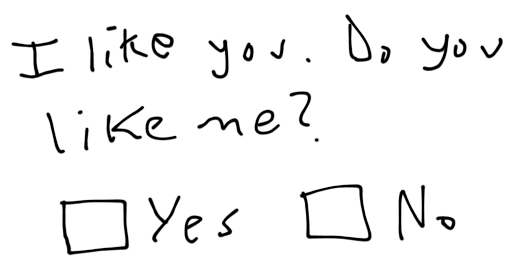 Matt Inman, famously of The Oatmeal web comic, and less famously (also formerly) of SEOMoz, lampooned the excesses of like-mongering in his own hilarious way, just a few weeks ago. That’s some serious funny.

What may be not so funny for marketers, is how much opportunity they leave on the table when they don’t understand how the “like” button works.

When I was in the 2nd grade, I passed a girl in my class a note, which said:

She read the note, but didn’t pass it back. All day, I was on pins and needles, wondering if she liked me… nothing. Then, after school, at the bus stop, she came up to me and whispered, “I like you… but I don’t like you like you.”

The first kind works for the web page that it’s on – and it lets people indicate to their friends on Facebook that they like something they found on the web. If you push the like button below, it will be duly recorded by Facebook as you “liking” this particular blog post.

If you pressed it, your friends probably saw something on their Facebook news feed about you liking this post. If you had hit “Send” instead, you could send it to specific people on Facebook. (*it is possible that this particular button may not appear when you’re reading the post… we’re not entirely confident that Facebook will keep displaying it, because of the context)

If you press the second button, it means that you like The SEO Braintrust in general, not a specific blog post or whatever… and if we weren’t running a “Page Like Story” as a sponsored ad on Facebook at all times, your friends would probably never hear about it.That kind of ad is called a “page like story” because it tells people that you like our Facebook Page.

There is no combo-all-in-one like button – so every time you use a Like button, you need to decide which it’s going to be.

If you’re actively trying to build your presence on Facebook, the “big like” will be a better choice for most applications, because when someone “likes” your Facebook page, you can deliver advertising for your Facebook page, specifically targeting their friends… and of course you can communicate with them directly.

This “friend of a friend” advertising is a remarkable capability – and one that Marty Weintraub (our go-to expert on FB advertising) discussed at great length in a presentation he did for your readers recently. You can watch the recording of Marty’s presentation here. Grab a notepad before you even go there.