You are here: Home / Features / Picking Fruit (to double a business the easy way) 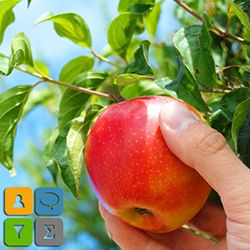 One of our clients set the goal to double revenue this year and came to me with a plan that would do precisely that. After hearing them out, I don’t told them not to do it and showed them an alternative that they actually like better. The same process might just apply to your business too, and it involves fruit trees.

We’ve all heard the expression “pick the low hanging fruit” and why would you ever pick fruit any other way? You’re really going to start at the top of the tree and work downward? You just have to stand there and look at the tree and realize there’s only one sensible way to pick fruit but that sort of simple clarity is harder to get in business because you might not be able to see the tree. We’ll get back to that tree in just a moment, but let’s make this real with our client’s case study (named changed to protect two very sharp entrepreneurs).

They sell a couple thousand products, some drop shipped, some warehoused, and some they manufacture overseas. They distribute through nearly all of the available channels including Amazon and eBbay. Their plan was to expand into a related product category, larger than the one they have focused on so far.

The plan was a good one. They had identified the market opportunity, had a pretty good idea of manufacturing sources, and had put in place the necessary bank financing. They really should go forward with the plan…but not this year – it’s too high up the tree.

“What about your core business?”, I asked.

We found 6 areas of the business where we could make modest improvements to add revenue in already proven ways. This used only their existing systems, products, and marketing. All we did was find places where we could tune it up a bit. Plus, all of the projects we identified were already on their “to do” list – they just hadn’t “done the math” to see what it was all worth.

In 30 minutes we created a plan to doubling their business that did not include new offshore manufacturing and a shift in marketing focus to a new product line. Don’t get me wrong – some day, maybe even next year – they will execute on their original plan, but this year they are picking low hanging fruit. I bet this works for you too. Want some examples?

Channel partners: They do consistent revenue from Amazon, eBay, and several others, but in not one of these channels did they have their entire product line uploaded. We’ve found this with a number of clients and helped them run the numbers to see how much it’s worth. Generally the only impediment is some staff time to format and upload the data initially and then monitor pricing and such thereafter. Our heroes in this story already had an individual in mind so it was an easy project to execute.

Product mix: They warehouse part of their line and drop ship the rest. The challenge comes when these items are ordered together by the customer. This creates some silly shipping costs for our client and delivery delays for their customer. So much so, that it has an impact on sales (who doesn’t want their stuff right now?). They had already identified this as a problem. Doing some quick estimates on the positive revenue impact convinced them that it was more than just a problem – it was a path to a solution! By adding a relatively small number of lower cost products to their warehouse they could avoid the majority of really bad shipping charges and delays.

Systems: They had a small technology gap that kept them from having live inventory on their website. Just by doing a rough estimate of what that should pull in additional sales, that project that elevated in importance.

Do the Math! I’ve skipped a lot of detail here, but make sure you don’t. Before we finished we had identified resources, estimated costs, and rolled up a preliminary budget. Without a budget, it’s not a plan, it’s just a dream.

There is a lesson for everyone in this case study: instead of looking for the one million dollar opportunity, first try to find 100k. Then do it again, and again. Ten of those is a million and these smaller wins – the lower fruit – are generally easier find and less risky to implement.

Sure, maybe the view from the top of that tree is great, but that’s a mighty tall latter you’re standing on – you sure wouldn’t want to fall. Go for the easy stuff first. The rest of the tree will still be there.